More commonly known as French crullers, these twisty puffs of doughnut are the perfect sidekick for your morning coffee. # 74: Maple Bacon Spritzkucken

These happy, fluffy doughnuts are known as ‘crullers’ in the United States, which comes from the Dutch term ‘krulle,’ meaning ‘twisted cake’ or ‘curl.’

In German, they are known as ‘spritzkuchen,’ which my limited German vocabulary recognized as ‘cake’ and a mystery word. According to a foray into google translate, ‘spritz’ translates to ‘injection’ or ‘spray.’ As odd as that may sound in the context of cake, but it might stem from the fact that these are shaped by piping them before they are fried.

I have a 3-way tie for my favorite kind of doughnut:

Sorry folks – no love for the classic raised sugar doughnuts. More for you!

As you can see, I mostly like denser, cakey doughnuts. Except these magical delicacies are the complete opposite: they are choux pastry piped with a star tip into rounds and fried until gold n’ bubbly. (Pronounced like Dolly Parton in Steel Magnolias, obviously.)

Gang’s all here. This version of choux called for 3 whole eggs and one egg white. I’m assuming it’s to keep the dough as light as possible.

Making choux is such an arm workout! You get to the stage where the flour is incorporated but you should keep beating it to let it cook a bit and it fights back against the spoon. It was a hard-won duel. 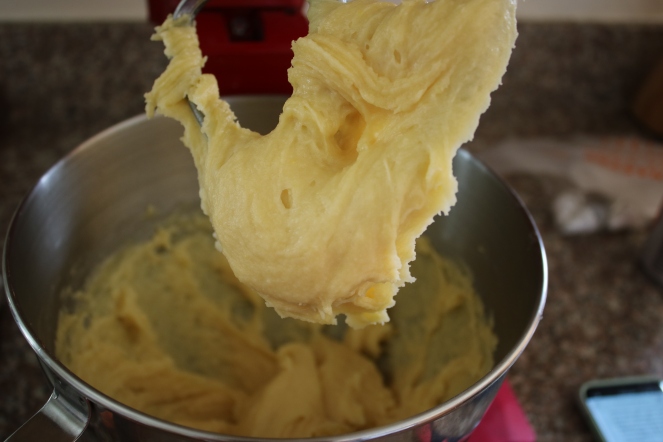 Quite and egg-cellent dough if I do say so myself.

This was the easiest choux I’ve ever piped. Maybe omitting the 4th egg yolk did the trick! It normally is not thrilled about being piped and would much rather be left alone, thank you very much. 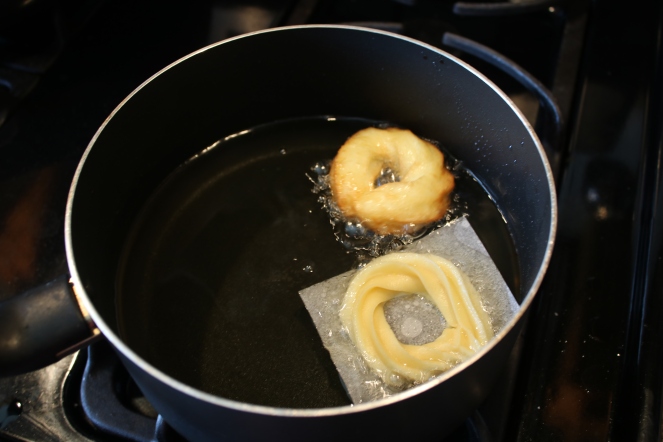 Sizzling away. In hindsight. I could have reused the parchment paper slips and used less of them. Oh well! 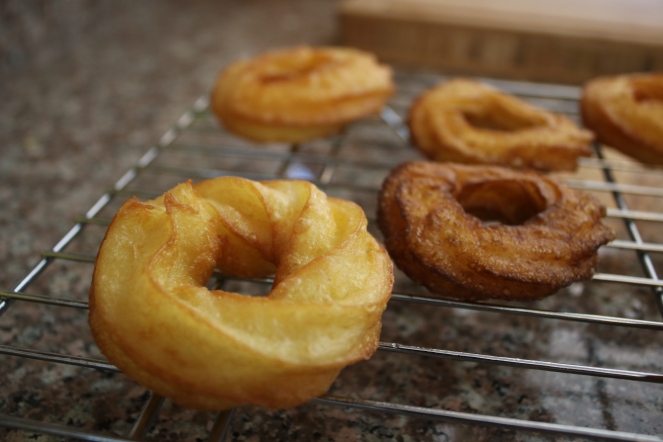 A word to the wise: if your oil is way too hot when you start frying, you’ll end up with a super dark and slight deflated doughnut. If you maintain the heat consistently at 375°F, you’ll get a golden, fluffy doughnut. As you can see, I learned this the hard way.

I whipped up a simple maple glaze using powdered sugar, maple syrup (the real kind, no fake stuff), vanilla and milk. You want it the perfect dunking consistency so add more milk if it’s too thick.

I recommend eating them immediately as they really don’t save well. Trust me, you won’t have a problem polishing them off. They’re mostly air, right? 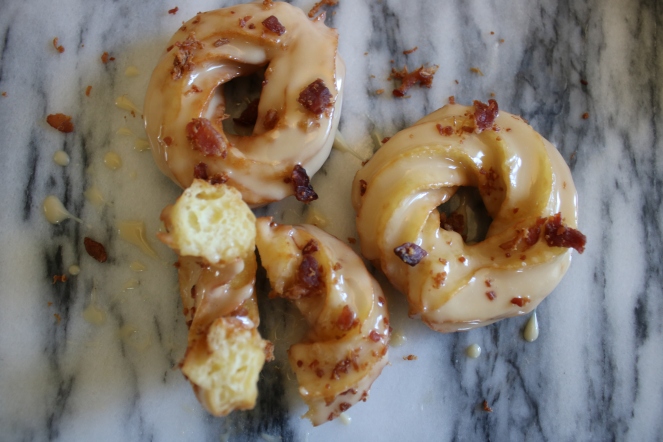