Have you ever heard of a bakewell tart? I hadn’t either! Mary Berry chose it as the technical challenge in episode 5 and the colors caught my eye. As well as the fact that it involves frangipane, which is basically like enhanced, baked marzipan. Almond all day, every day.

The bakewell tart has a fuzzy past – there isn’t one defined origin. There’s a town called Bakewell in Derbyshire that takes pride in making them, but apparently there’s no evidence that the treat actually started there (bummer.) The pudding version of the bakewell dates back to Tudor-era cookbooks, and the modern tart with jam as the base layer most likely comes from the mid-1800’s and involves mixing-up in the order of the layers in a jam tart. This article has more details about the origins debate.

I prefer to pretend that it is an indicator that you can bake well if you can create this tart a la Mary Berry. That’s my story, and I’m sticking to it. 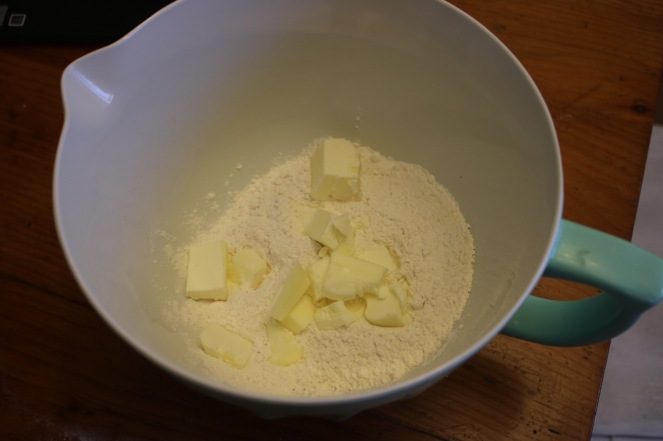 Some butter, ready to be “rubbed” into some flour. British instructions are always so interestingly phrased. There was a thunderstorm in Oakland while I was making this! It made it feel more British. The constant conversions to Fahrenheit from Celsius and the weighing of ingredients enhanced this feeling.

Ready to roll! Such a happy little lump of shortcrust dough. Have I mentioned recently that I love baking crust with butter? Just for the smell alone, honestly.

I’m still not entirely certain why baking it without filling on top is called blind baking. Logic suggests that if you bake it with your filling on top, then you are taking a risk and don’t know if your crust is fully baked until after it’s too late . . . I had a good time reading through these possible explanations and I like the one that implies there was a miscomunication causing the French term “blanc” to turn into the English word “blind.” Baking white makes a tad more sense to me than blind, but I’ll let you be the judge. 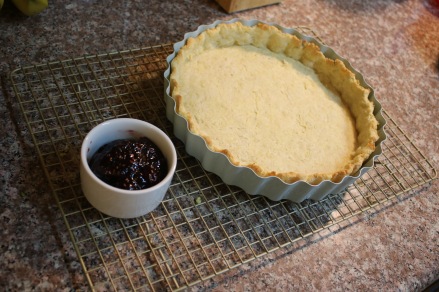 Frangipane time! There was an egg involved as well – but it kept wanting to roll out of the picture. Cest la vie. As you can see, I kept testing to see if it was cooked through with a skewer. However, the opaque layer of icing made this irrelevant. Voila!

Such a satisfying step. If the crust is baked well (wordplay 100% intended), the shell will slide right off to the counter below.

Another thing I learned with this bake: feathering is a type of decorating where you drag a skewer or other thin object in parallel lines through multiple colors of icing or batter to create a pointed design. My icing set a little too quickly for perfect feathering – but hey, if it was perfect, you wouldn’t want to cut into it. It’d be to beautiful.

I recommend eating it warm (yum!) though I must warn you, it will melt and look a bit like a Salvador Dali painting. If you wait til it is completely cool, you will get a clean slice. Life is too short – eat it warm. Happy munching!

One thought on “Mary’s Bakewell Tart”