This cake is in honor of lavender fields in bloom and piles of fresh berries at the market. Week 29: Lime Cake with Blackberry Lavender Icing

I had my eye of this blackberry lime cake for a while, but wasn’t sure how to incorporate it into my blog project (I’ve made cakes before so it’s not a new item, you know?) I added the goal of making it a naked cake and researched possibilities for incorporating lavender in some way. Ta-daa! Blackberry lavender icing was born. The color combo is perfect, dontcha think?

The dark green lime on the counter is a boring market lime, but the huge yellow-green lime in the bowl is from my mom’s yard! It’s unclear whether her lime tree is having an identity crisis, though, since it smells more lemony when you cut the fruit open. There is a pretty cute lemon tree on the other side of the yard, so there might just be some cross-pollination issues happening.

The recipe called for making your own buttermilk by having the lime juice sit with the milk. I tried to ignore the unfortunately curdled texture that goes along with it, but it translates into a nice, light-textured cake. Apparently, the acid in the buttermilk (or lime juice milk in this case) reacts well with the baking soda – both neutralizing the metallic taste of the baking soda and helping to build more air bubbles.

Like my solution to constantly misplacing my recipe? Boom. Less buttery finger prints on it = success. 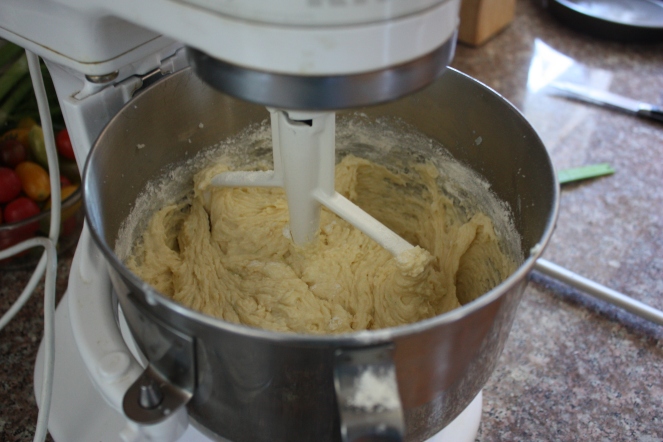 The mix after all the ingredients are incorporated. Such a thick, rich dough. My hope was that it would result in a sturdy cake that would hold up well and look nice as a naked cake. Alas, the light fluffy texture would foil me once again.

Waiting to be evened out and popped into the sauna! Shout out to my mom’s cake pans (I’ll clean them and return them, I promise!)

Now on to the icing. I don’t say frosting, because that gives me visions of loads of fluffy sugar piled on top of the cake. Icing seems much thinner and less imposing, don’t you think? I believe the generally accepted understanding is that icing is more glossy and thinner (almost like a glaze, but thicker, and more sugary.)

Here’s a close up of those beauties. Took me three tries to find blackberries – everywhere seemed to be sold out! It appears that everyone made a blackberry dessert this weekend.

Before and after. Look at that color!

When I strained it, the seedy leftover part was still too good to throw away. I added it as a flavor enhancer between the bottom and middle layers of cake, because, why not? 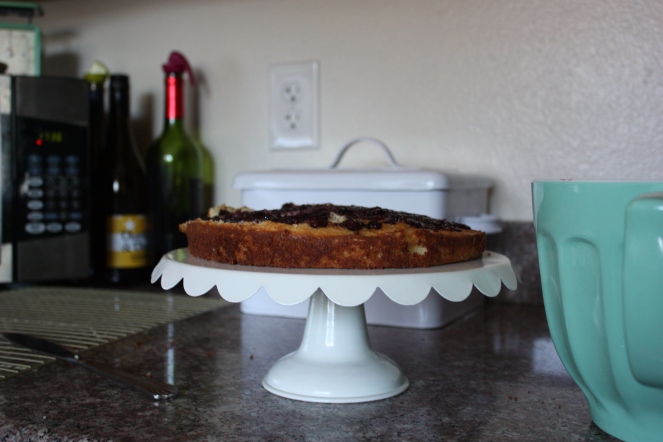 The first step: try to even out the bottom layer so the rest of the cake will sit straight. End up with a lot of cake shavings that you immediately devour. They are magical and contain no carbs.

I had pulled out my purple food dye, just in case. As you can see, it was not needed at all. Such a lovely, natural berry color! 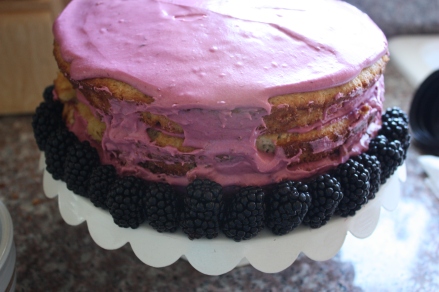 I couldn’t decide how to arrange the berries as the garnish. Too many possibilities!

As you can see, the naked cake idea had to go out the window. The crumb of the cake was too loose, and it didn’t hold up well after parting with it’s baking pan. Cest la vie. I got an artistic, picasso icing job instead.

And part of it didn’t even want to part ways with it’s pan! Full disclosure. (Also, scalloped edges are the theme of this picture.)